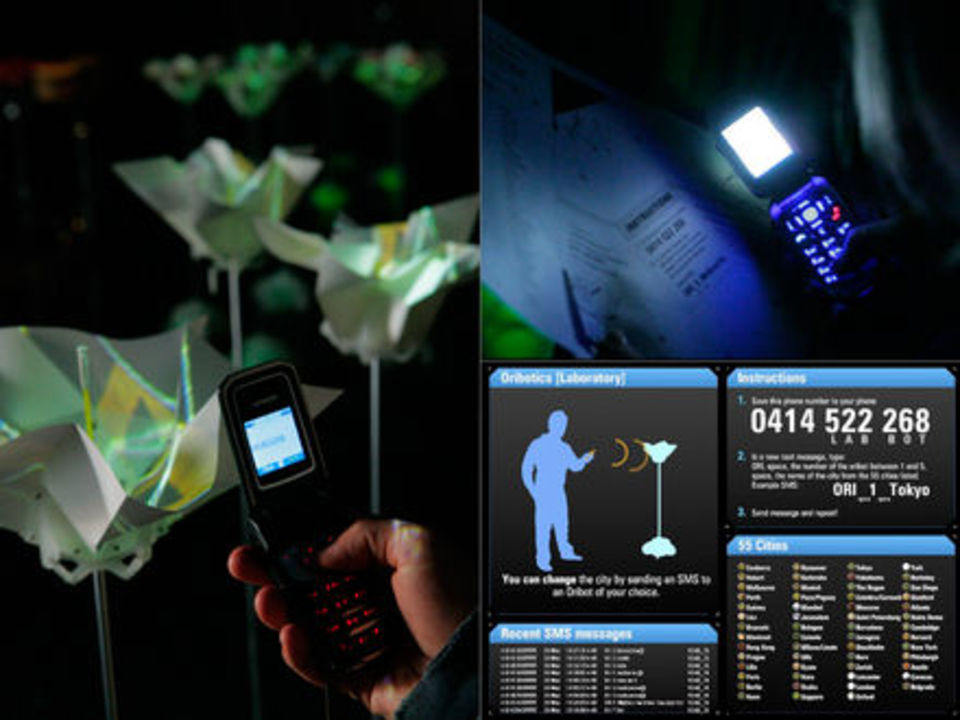 Oribotics [laboratory] presents the next evolutionary step in my research into robotic origami.

I am calling this new generation of oribotic flowers, or oribots, the 'Atom' generation, taking their name from their birthplace, Takadanobaba, a suburb of Tokyo. They were born during my artist residency in Tokyo earlier this year.

The manga icon and author of the Astro Boy comics, Osamu Tezuka, wrote that Astro Boy (or ‘Atom’ in Japanese) was born at the Ministry of Science in Takadanobaba. I studied Tezuka's original Japanese versions of the comic, in particular ‘The Birth of Astro Boy’, in an attempt to better understand humans’ desire to create robots. I was also seeking to delve deeper into my own inspiration and motivation for researching and creating robotic origami. In the comic, Astro Boy's father loses his real son, Tobio, and builds Astro Boy in his son’s image. There are parallels between our loss of nature, so graphically represented by the concrete jungle of Tokyo, and my own creation of robotic flowers. Furthermore, there are links between creating life - as Astro Boy’s father does - and creating something that can be loved. And the world loves Astro Boy.

When considering how an oribotic flower might communicate, the most natural way seemed to be through light. Light causes all flowers to open, hence light is the most natural form of interaction for a flower. The oribots also need to gather nutrients from the world. A network of weather data has been created for them to listen to. The network ‘speaks’ with the light from a data projector, giving the oribots details of the weather in remote cities. The oribots respond with movement, and their environment responds with sound.

The weather data is gathered from an online weather service. The cities were selected for their links to significant origami or robotic activity. Interaction with this weather data system is enabled via a mobile phone text message. A simple message is interpreted by the system, linking a selected city to an oribot of choice. This transaction becomes the link between the viewer and the work. As a contemporary form of communication it encourages remote intimacy, and electronic immediacy.